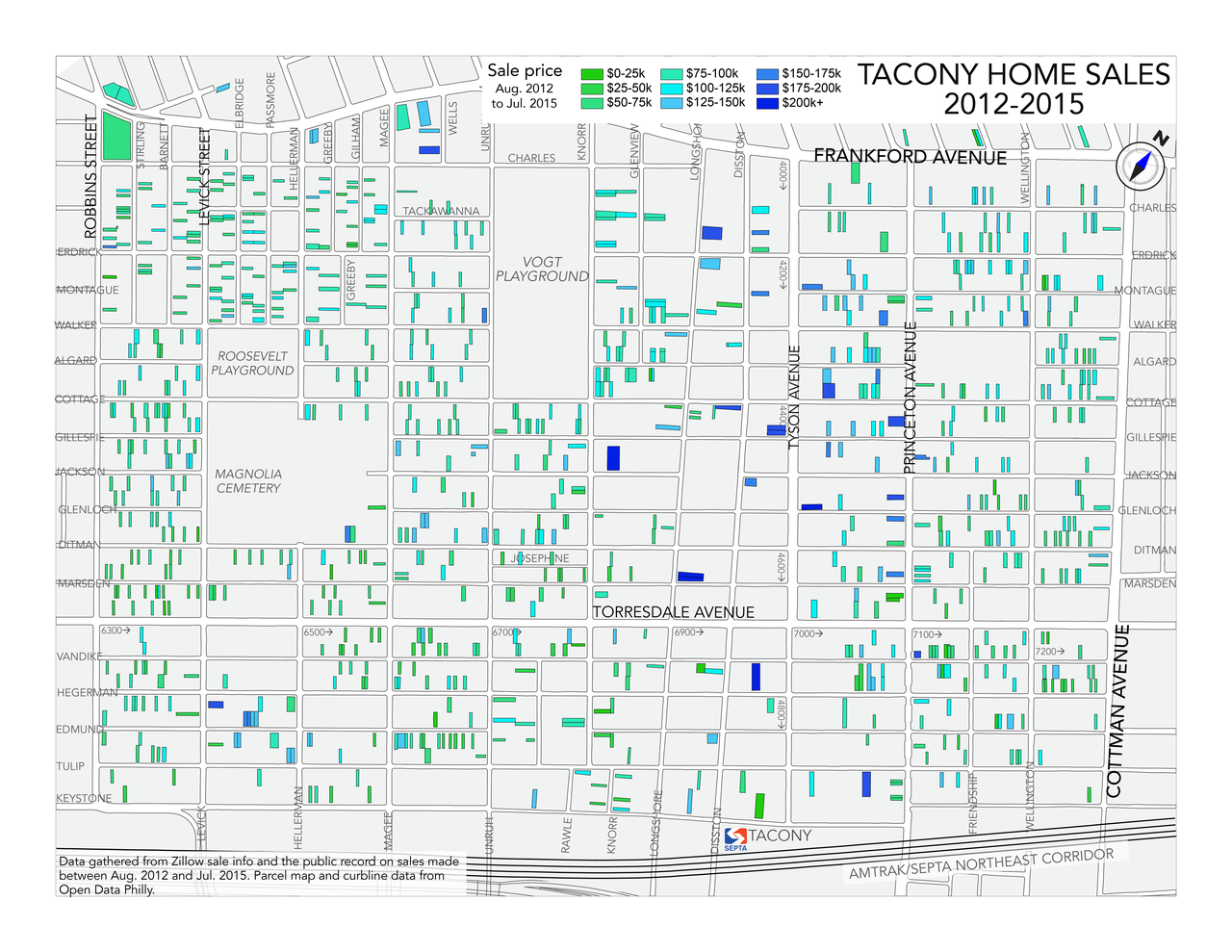 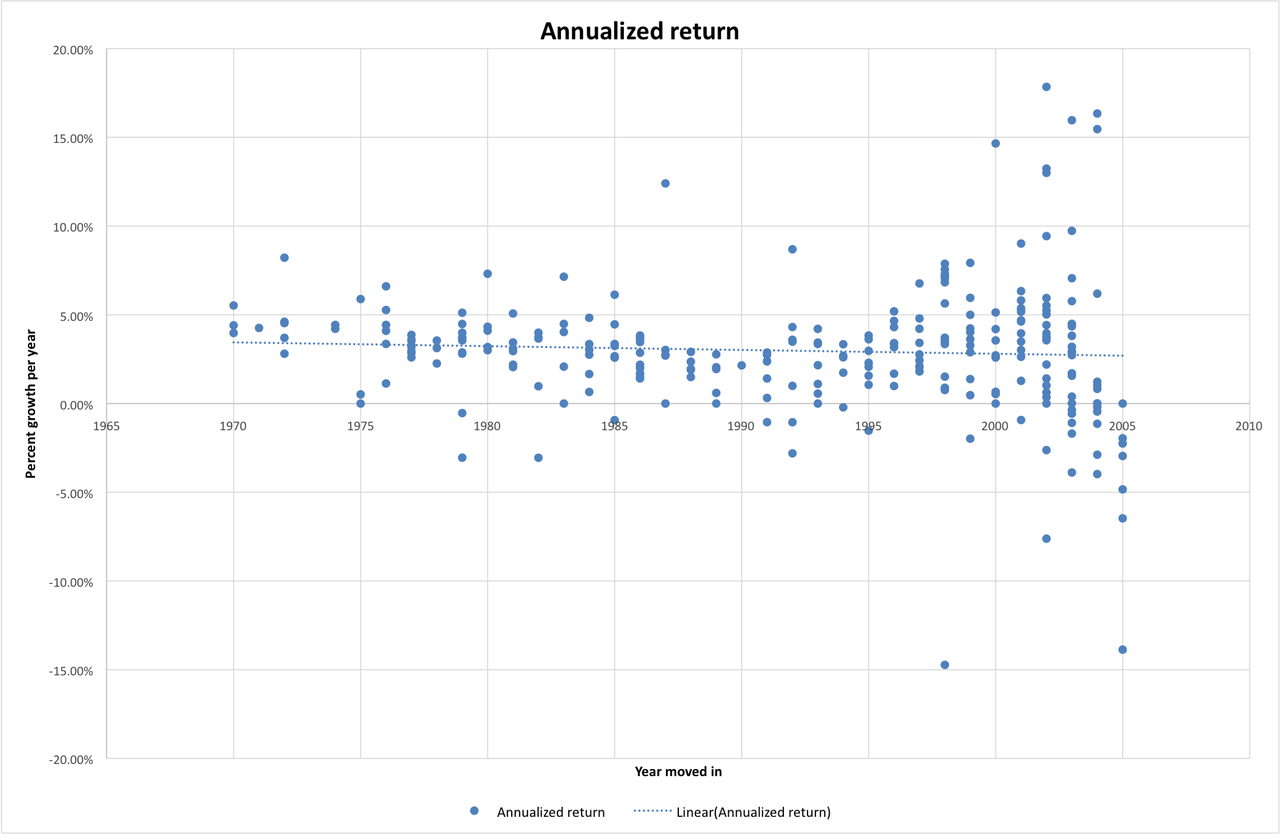 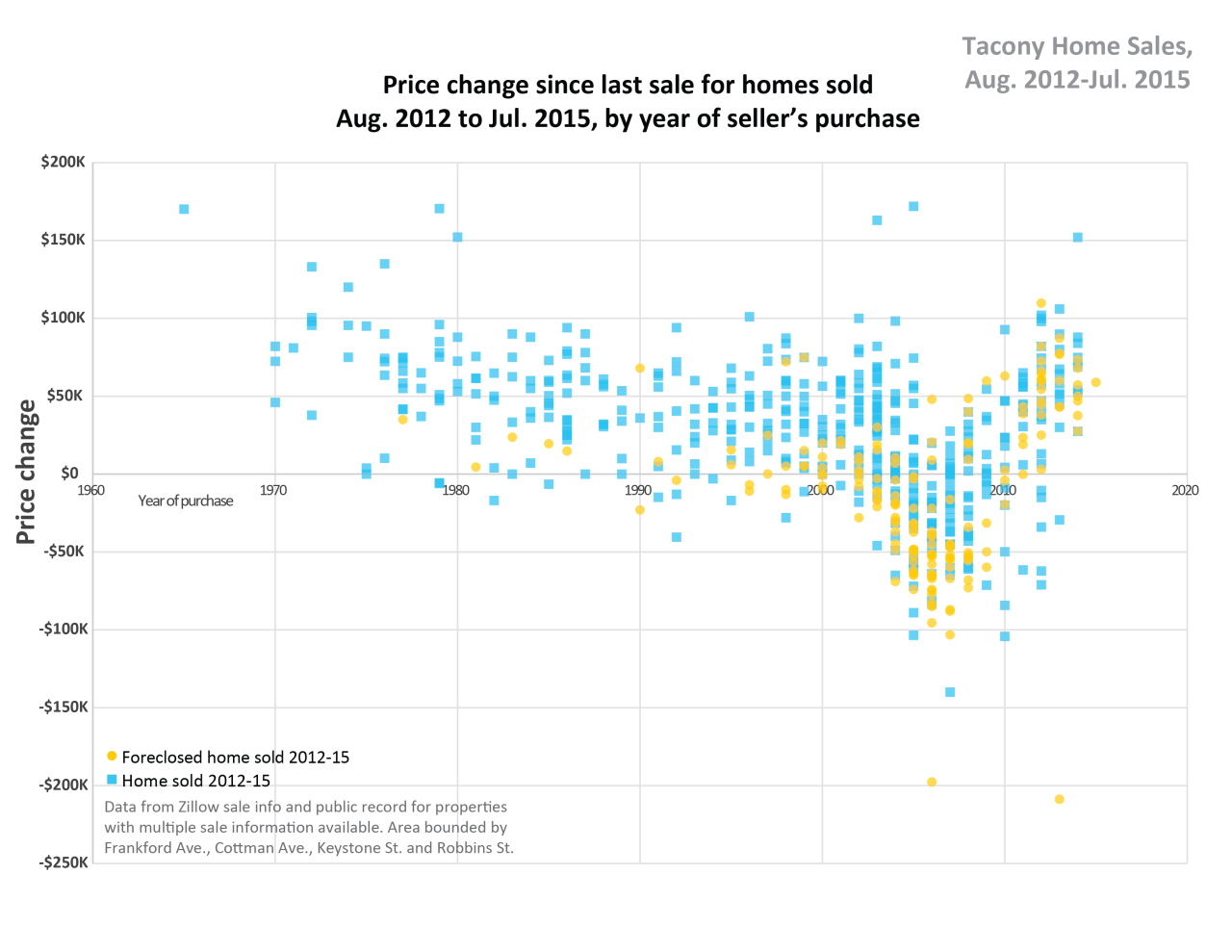 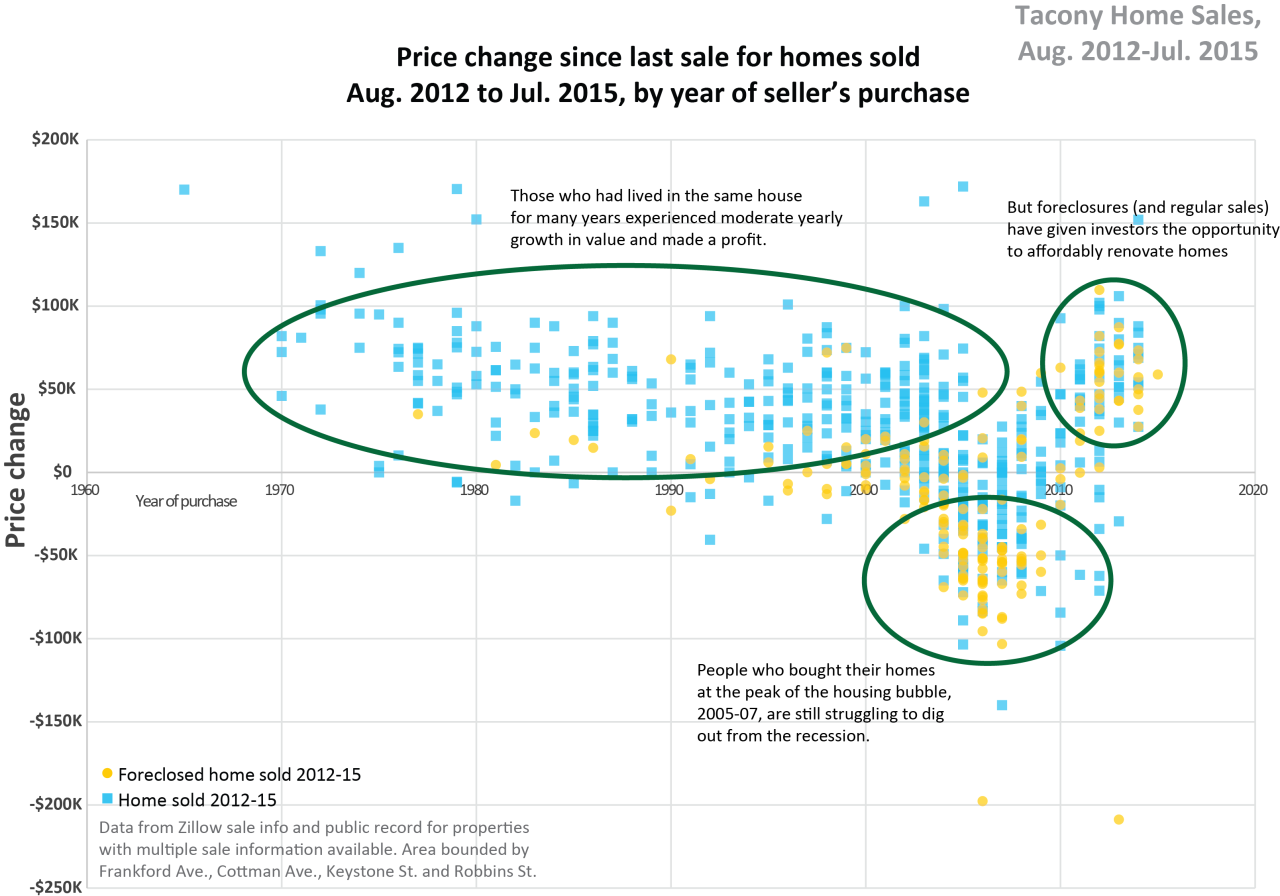 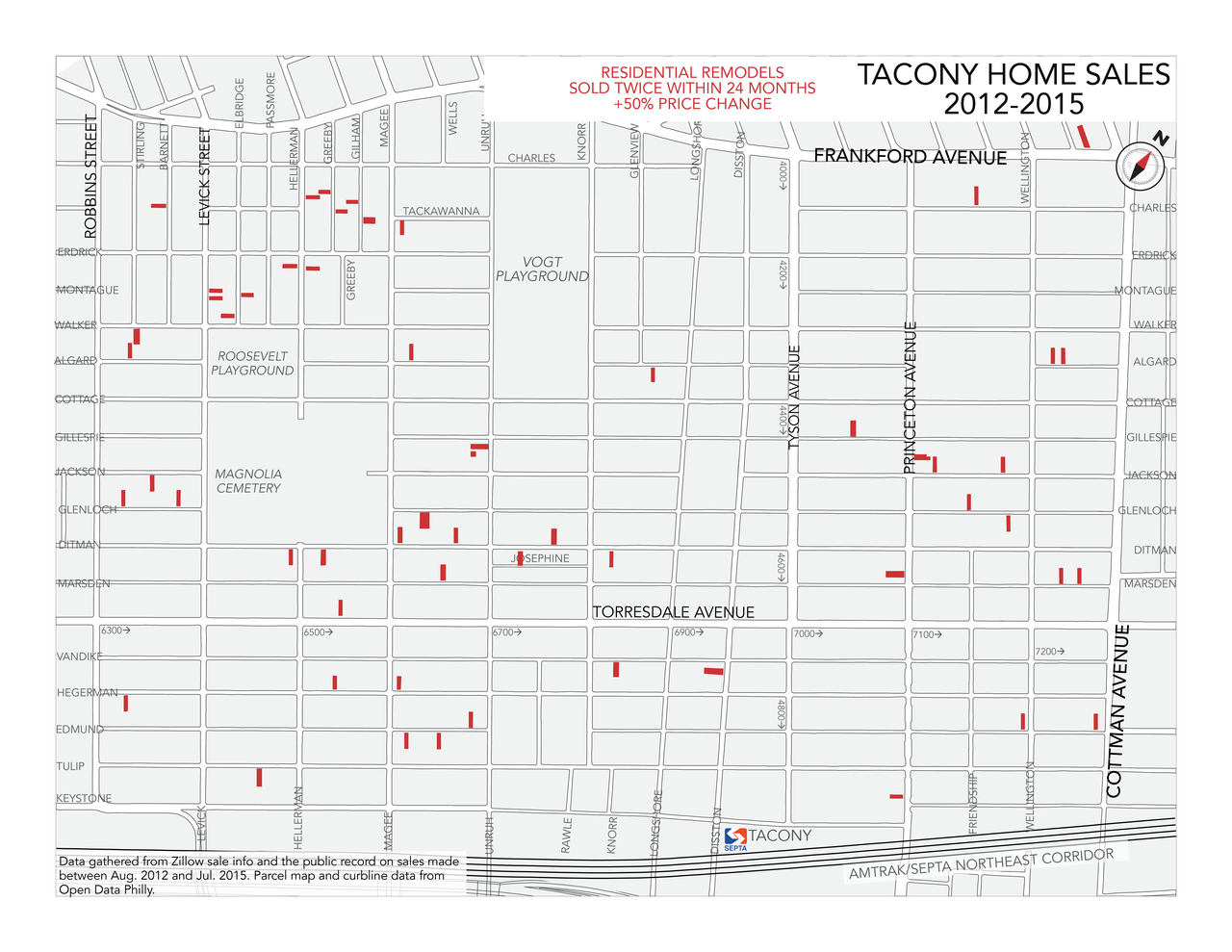 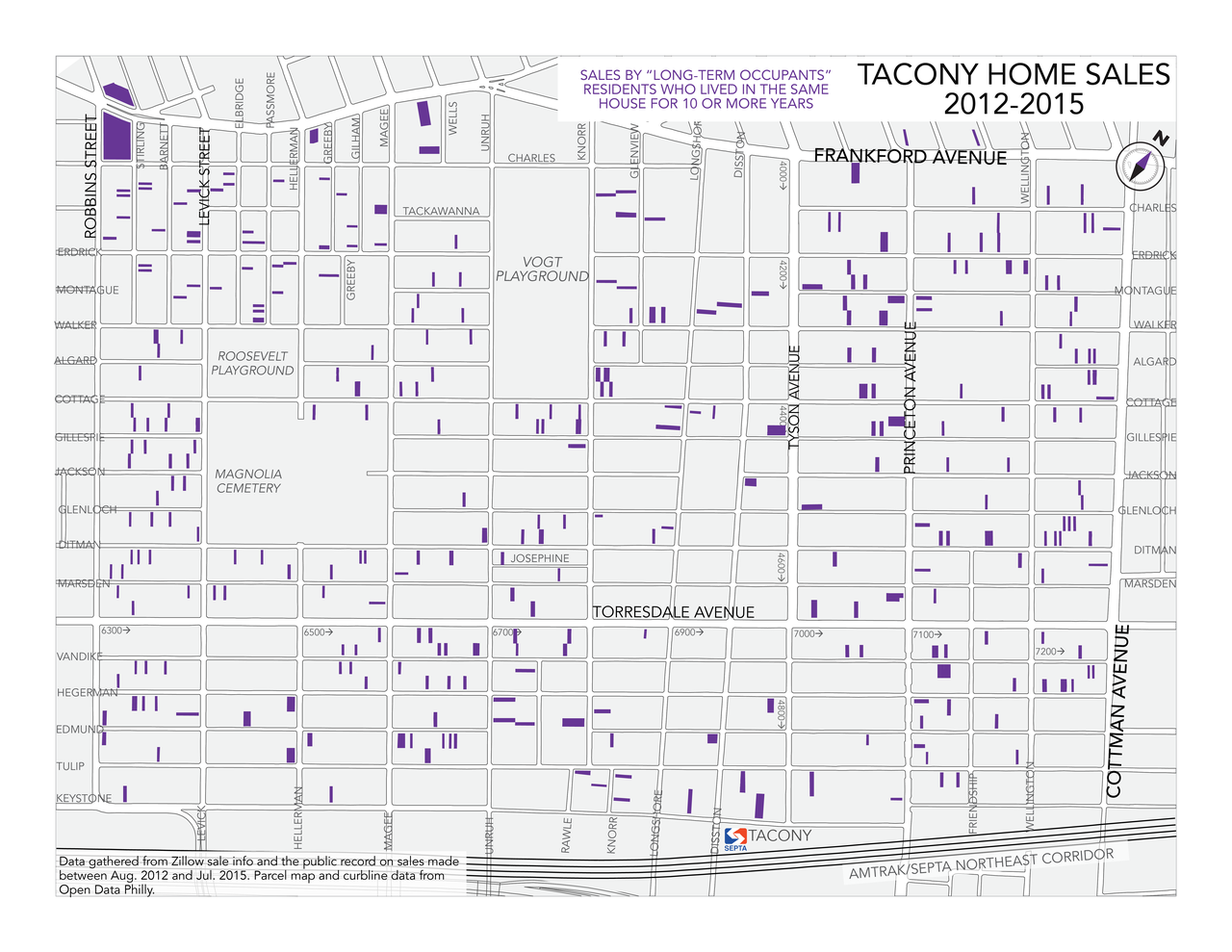 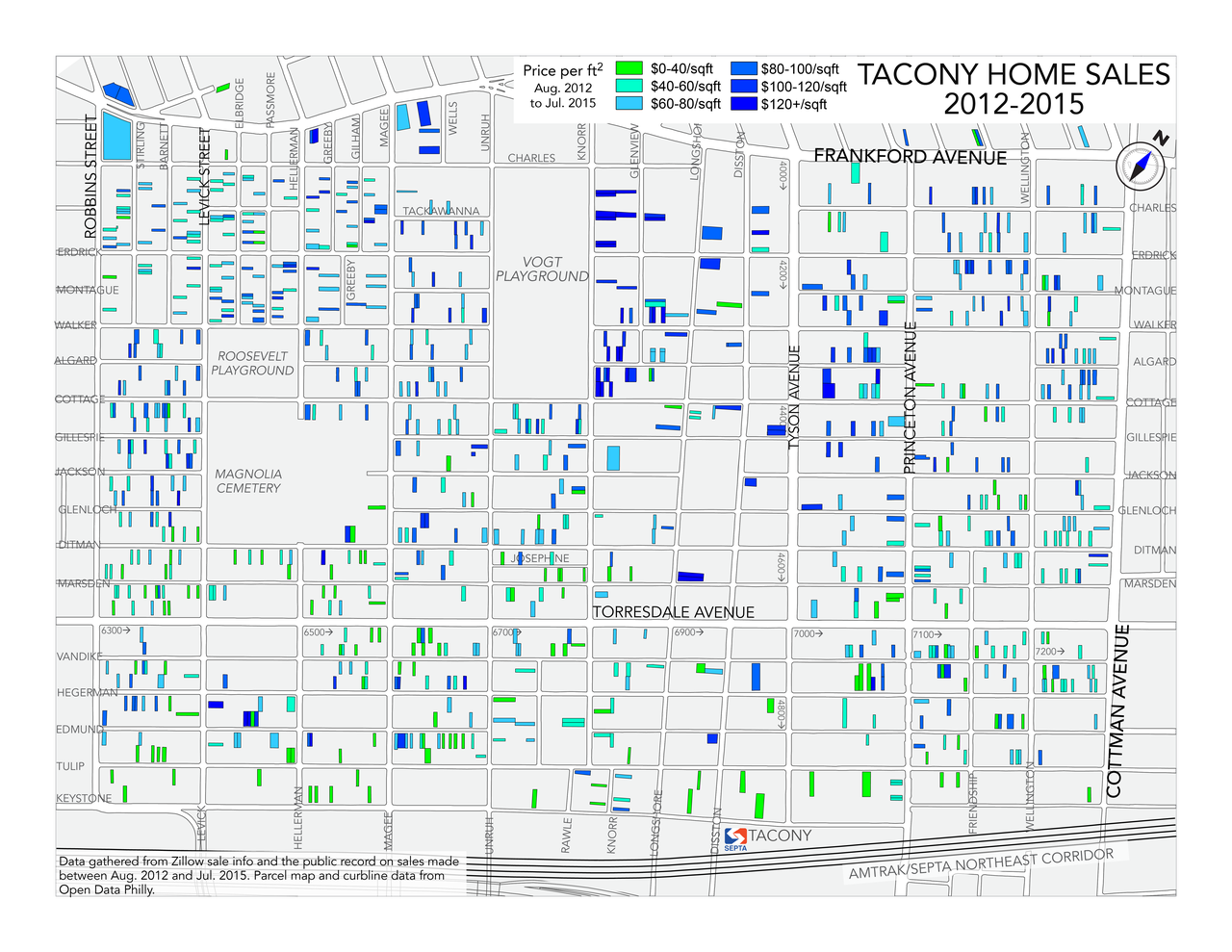 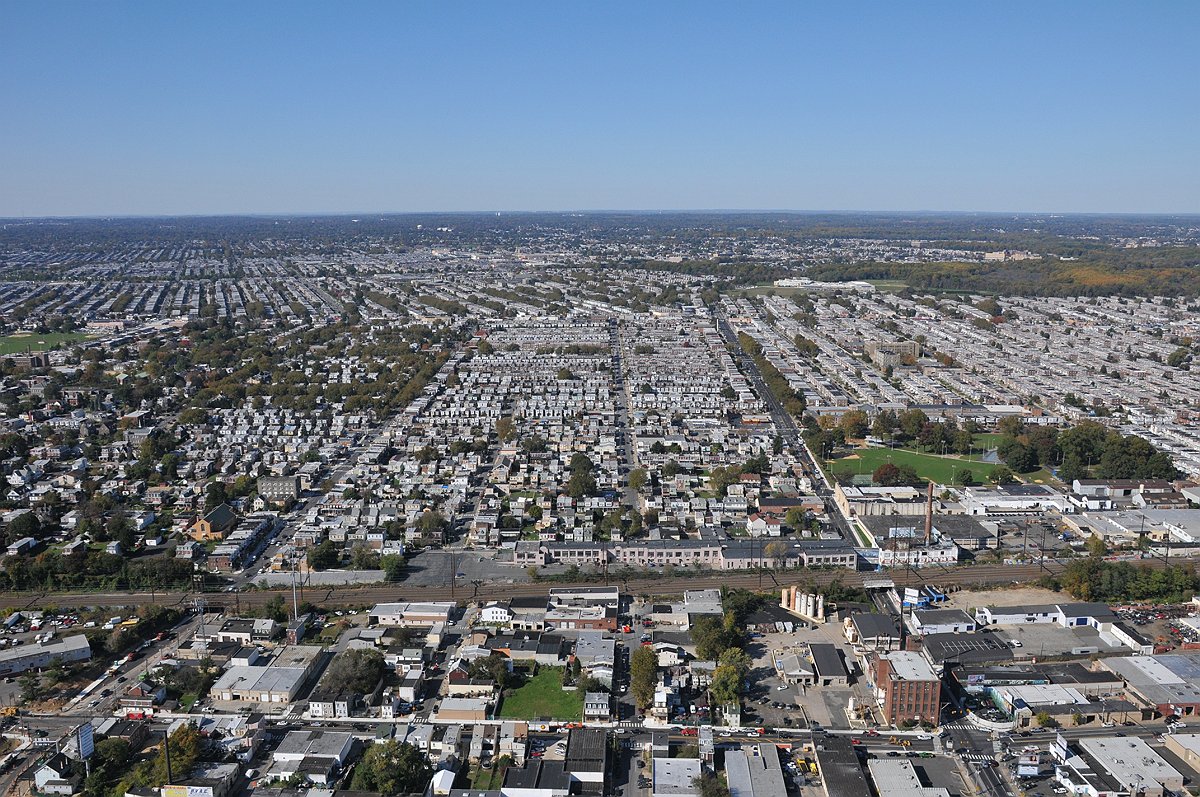 Homeownership has long been a pillar of stable neighborhoods and goal of neighborhood plans. Besides having it as shelter, owning a home is also an important long-term investment for many Americans, who may sell the house after retirement or leave it as an estate for their children. The homeownership rate in the U.S. has been falling steadily since 2005 and is now back to the rate seen in the 1980s and 1990s â€“ about 63 percent.

Because of its dual role as shelter and investment, housing and the housing market tell us a lot about the economy, family trends, and what the role and identity of residential neighborhoods is. In this piece, we look at housing sales data for the Tacony neighborhood of Philadelphia over the past 36 months (Aug. 2012 to Jul. 2015). Historically, Tacony has been a high-homeownership neighborhood with its housing stock of row homes and twin homes, and in 2013 the local homeownership rate was slightly above the national average, at 65.5 percent.

Data was gathered from Zillow on 846 properties with sale information in the public record. For 636 houses, previous sale information was available and recorded. The search area was bounded by Frankford Avenue, Cottman Avenue, Keystone Street and Robbins Street.

One theme that emerged from the sales data was the neighborhoodâ€™s relatively low cost of housing. In 846 sales, the median price was about $85,000, or about $70 per square foot. This is compared to a citywide average of $158,000 or $124 per square foot, according to Zillow data. However, Tacony doesnâ€™t exhibit signs of a blighted neighborhood â€“ there are hardly any vacant lots or unsecured houses. The housing market has been active, with 846 of the neighborhoodâ€™s roughly 9300 units being sold in the past 36 months.

Some of these sales we classified as â€œlong-term occupants,â€ homes that were sold by owners who had lived in them for 10 years or more and never went through foreclosure. These are the kind of residents that contribute to neighborhood stability and get the long term, steady growth in value the â€œAmerican Dreamâ€ has advertised. Out of 636 properties with multiple sale information, 277 long-term occupants sold their homes. They had lived in their current home on average for 19 years. This group on average experienced an annual growth in housing value of 3 percent. For example, one house on Tulip Street bought in 1987 for $60,000 was sold in 2015 for $138,000.

Another group of homes were residential remodels (often referred to as â€œflipsâ€), homes that were bought by someone specializing in home renovation, putting in some improvements and re-selling the house once the work is complete. Activity is growing in this group: there were 60 of these in Tacony in the last 36 months (we defined a flip as a home sold twice in 24 months with a >50% change in sale price). Not all flips were homes sold at foreclosure or sheriffâ€™s sale â€“ 27 of these 60 properties experienced a foreclosure.

Residents often meet an active â€œflippingâ€ market with conflicting attitudes. Neighbors sometimes worry about a hot market pushing them out through increased property taxes, or that the character of the neighborhood will change as new residents move in. When it occurs at a reasonable rate, it maintains a rotating supply of newly renovated housing stock, rather than letting houses deteriorate or interior finishes become too out of date. A steady stream of new investment is key to neighborhood revitalization, and is a sign that there are positive expectations for the areaâ€™s future. Redevelopers may be trying to get in â€œahead of market.â€

Flips in Tacony arenâ€™t likely to push anyone out in the near future. Of the 60 we identified in the past 3 years, the median sale price after renovation was $114,000. The data doesnâ€™t show signs of a speculative market, where contractors renovate homes and sell them to people who really canâ€™t afford them, or as investment properties and second homes. However, the apprehension around these conditions is understandable given that the neighborhood is still digging out from the depths of the last recession â€“ which leads us to our second major theme.

The conditions just described affected millions of homeowners across the country  and not just those who bought overpriced renovations. Many workers lost their jobs and were no longer able to make payments on mortgages they signed when they were fully employed. The hot property market in 2005-2008 drove prices above what they should have been in a more rational environment, and even with historically low mortgage interest rates many homebuyers of all income levels ended up defaulting and going through foreclosure.

This chart of the sales we recorded for the last 3 years highlights the effect the mortgage crisis on Tacony. It shows what year the seller purchased their home, and how much money they made (or lost) on the home during their time there. Ideally, homeowners are hitting that ~3 percent yearly growth mentioned earlier, and many of those who bought their homes in the 1970s, 80s and 90s experienced this (see second chart).

But as soon as we look at those who bought their homes during the housing bubble, 2005-08, we see a very different picture. Nearly ten years later, these homebuyers are still struggling to sell their house for as much as they purchased it for â€“ even those who never experienced foreclosure. 2006 was by far the worst year: 45 of the properties sold in the past 3 years were last bought in 2006, and just 6 of them were sold for a profit.

What started off as a macroeconomic problem of mortgage-backed securities and credit-default swaps quickly became a neighborhood social problem when the foreclosures and evictions started. For many of the people who lost their homes in the past 7 years, Tacony was probably a good fit for them economically as a homebuyer â€“ they just overpaid during a hot market and werenâ€™t able to keep up.

That being said, the â€œflipsâ€ completed in the last 36 months have added about $3.8 million in real estate value neighborhood-wide (the total value of all 846 sales in this study was $73.6 million). Taconyâ€™s housing market is still attracting attention from contractors, and banks are finding qualified candidates for new mortgages at less inflated prices.

Despite the bumpy road the housing market has followed over the past few years, the neighborhood seems to be more characterized by those â€œlong-term occupantsâ€ we mentioned earlier. Without looking at full property ownership data for the neighborhood, itâ€™s impossible to know for sure what the average tenure is like here, but from recent sales it appears that many people choose Tacony as a community to settle down, find a house to buy, and stay there for many ye

If these long-term residents are being replaced with people who have the same intention, maybe the turbulence caused by the financial crisis will give way to a stable market, and community, more reminiscent of the past decades residents are so likely to remember at community meetings. As has been stated, Taconyâ€™s market is ripe for those forming new households and moderate-income homebuyers looking for a stable long-term investment. And attracting these buyers is part of the neighborhoodâ€™s revitalization strategy.

According to the American Community Survey, 75 percent of Tacony homeowners pay between $800-1400 per year in property tax. Taking into account monthly mortgage payments and local income, the picture is mixed. 30 percent of mortgage-holders pay less than 20 percent of their income to housing, but for 20 percent housing takes more than half their income. Of those who have stayed long enough to own their home outright (mortgage paid off), 20 percent still have a housing cost burden of greater than 35 percent.

Poor homeowners were unsurprisingly the most burdened. But for owner-occupied houses with incomes above $35,000 a year, just 12 percent of them were considered â€œhousing burdenedâ€ â€“ paying more than 30 percent of income to housing. While the debate continues about how to provide more affordable housing around the city, Tacony is an example of a community where even a single-career moderate-income family can find options that meet their budget and family needs.

The most expensive homes in the neighborhood were found in an area between Tyson and Princeton Avenues, where row homes give way to twins and single houses with more spacious yards and off-street parking. These streets also have much greater tree cover, a value-adder documented in numerous studies of urban real estate.

Accounting for differences in home size, the highest home values per square foot were found adjacent to Vogt Park in the center of the neighborhood, again on relatively tree-lined streets. These lots have the park across the street and sit in between Frankford and Torresdale Avenue commercial corridors and bus routes.

Proximity to the Tacony regional rail station didnâ€™t seem to carry a price premium, but there were too few sales in this part of the neighborhood to make an authoritative statement. Many of the homes near the SEPTA stop date from the late 1800s when the Disston Saw Works and Disston family formed the core of the neighborhoodâ€™s identity. This estate area is a very small part of the housing stock and it is understandable they did not show up in just 36 months of sale data.

Tacony is unlikely to experience any major changes in its housing stock except through renovation and redevelopment. Prices are too low for new construction to be profitable, while the quality of the existing housing is high enough that buildings wonâ€™t be condemned or demolished. The market for residential remodeling is continuing at a steady rate. Further inquiries could determine the average time a renovated home is listed before sale, but right now the market seems to be at a happy medium between profitability for those doing the renovations and affordability for the resulting homebuyers. Like with the long-term occupants, there isnâ€™t a noticeable geographic concentration of â€œflips.â€

This study has shown that there is still an abundance of affordable workforce housing of decent quality in some neighborhoods. Many people do have to drive to work, but there are numerous public transit options both to and from Center City and around Greater Northeast Philly. With continued investment in local retail and institutions such as the Tacony Free Library and Tacony Academy Charter School, the housing market in the neighborhood should enjoy further activity and development. 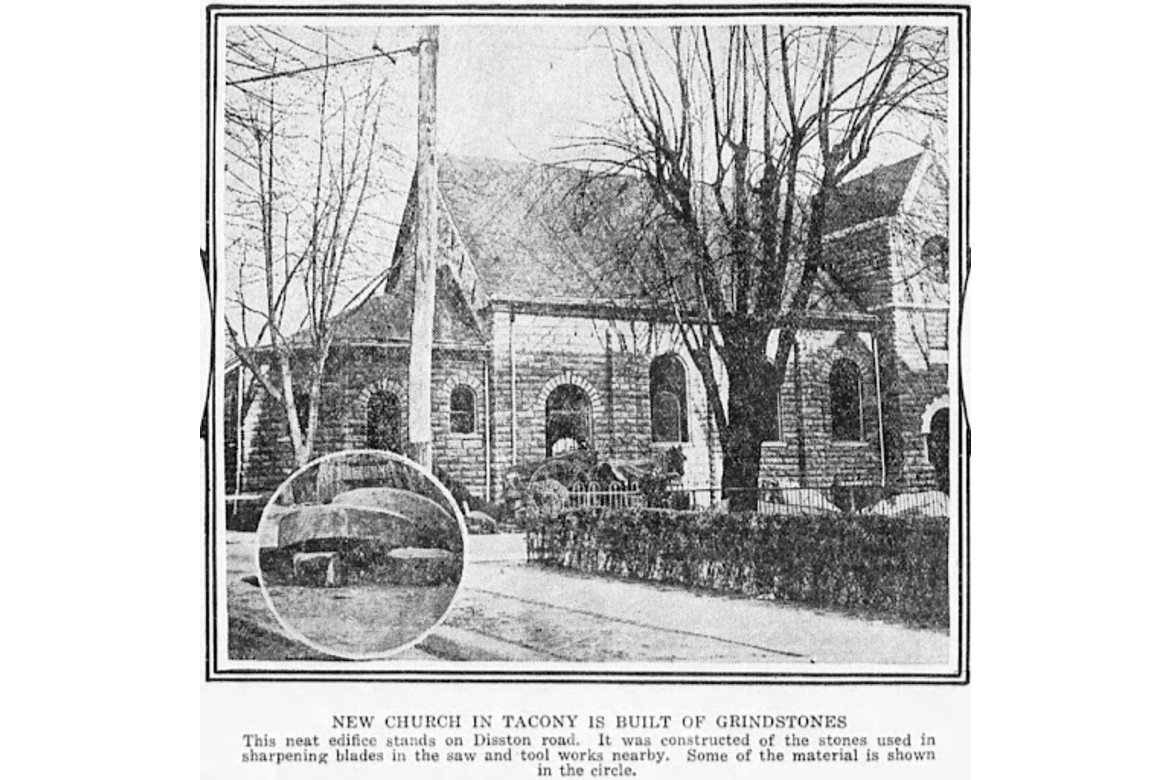