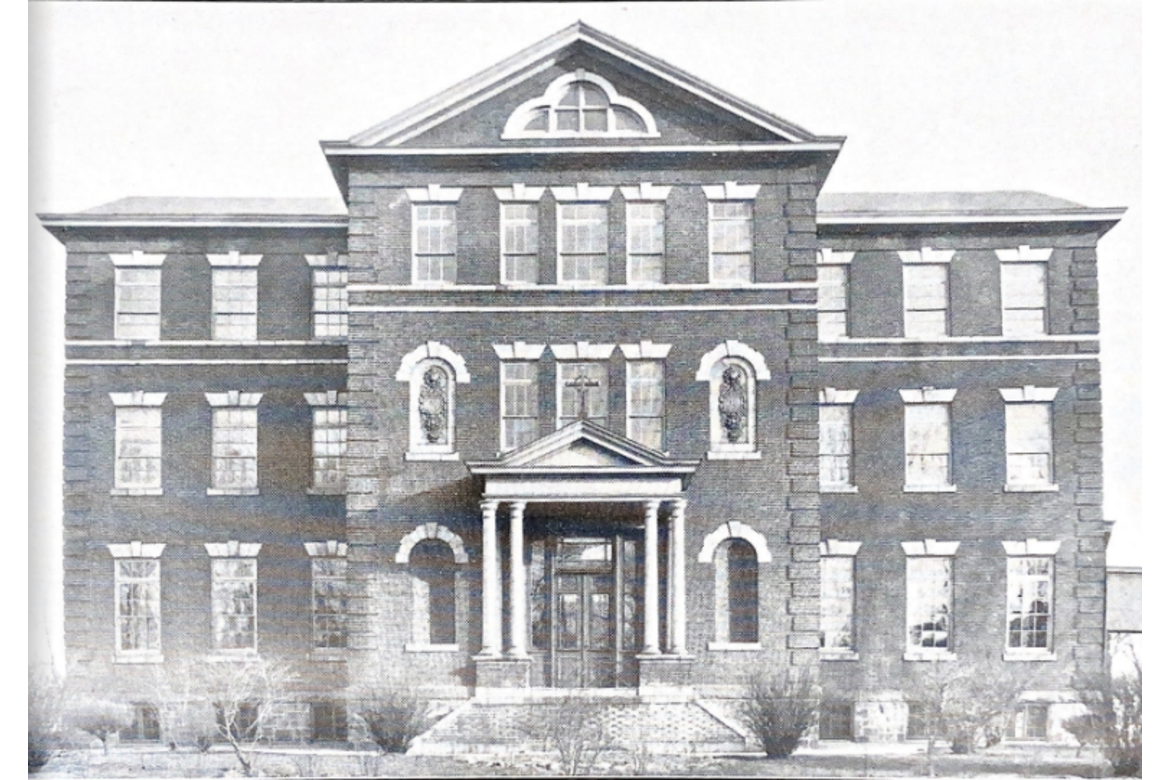 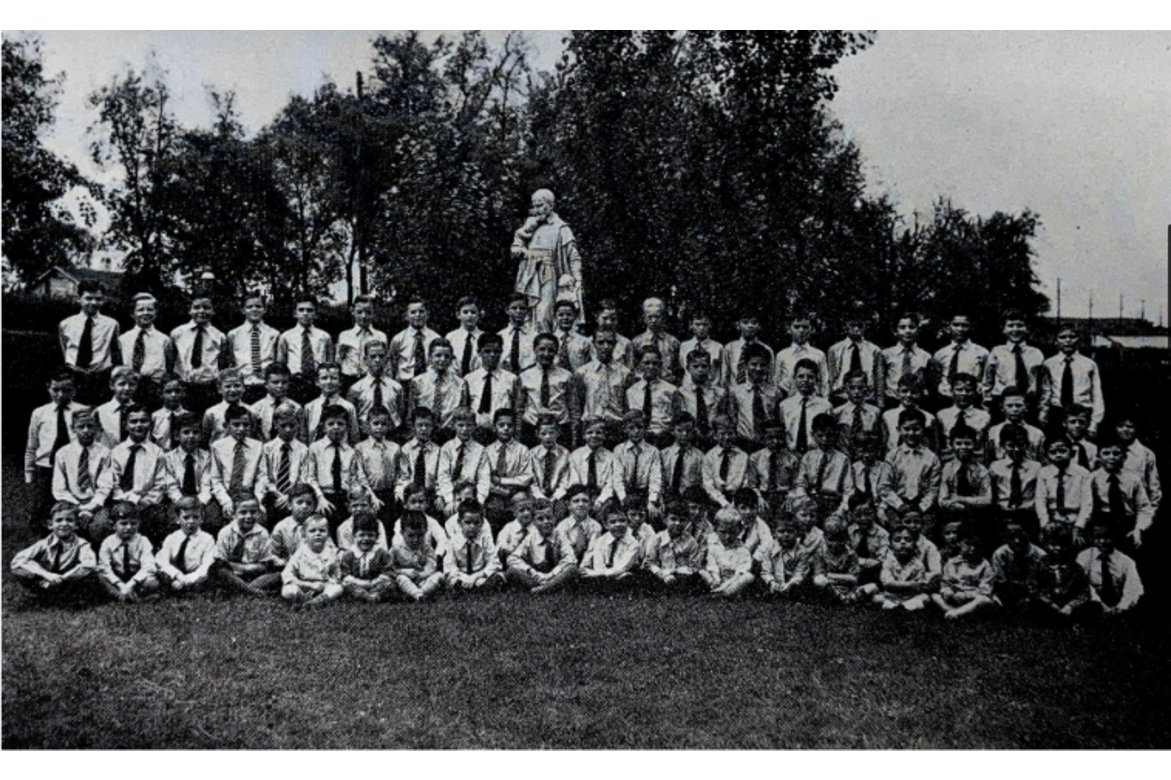 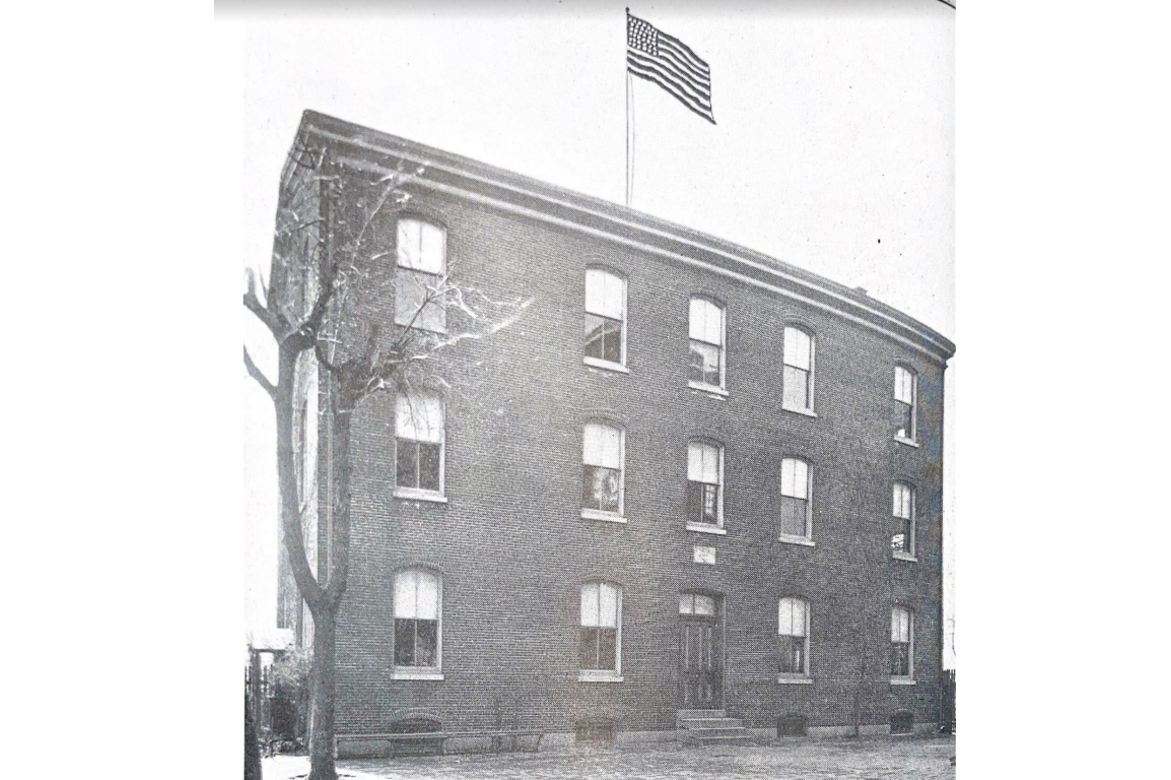 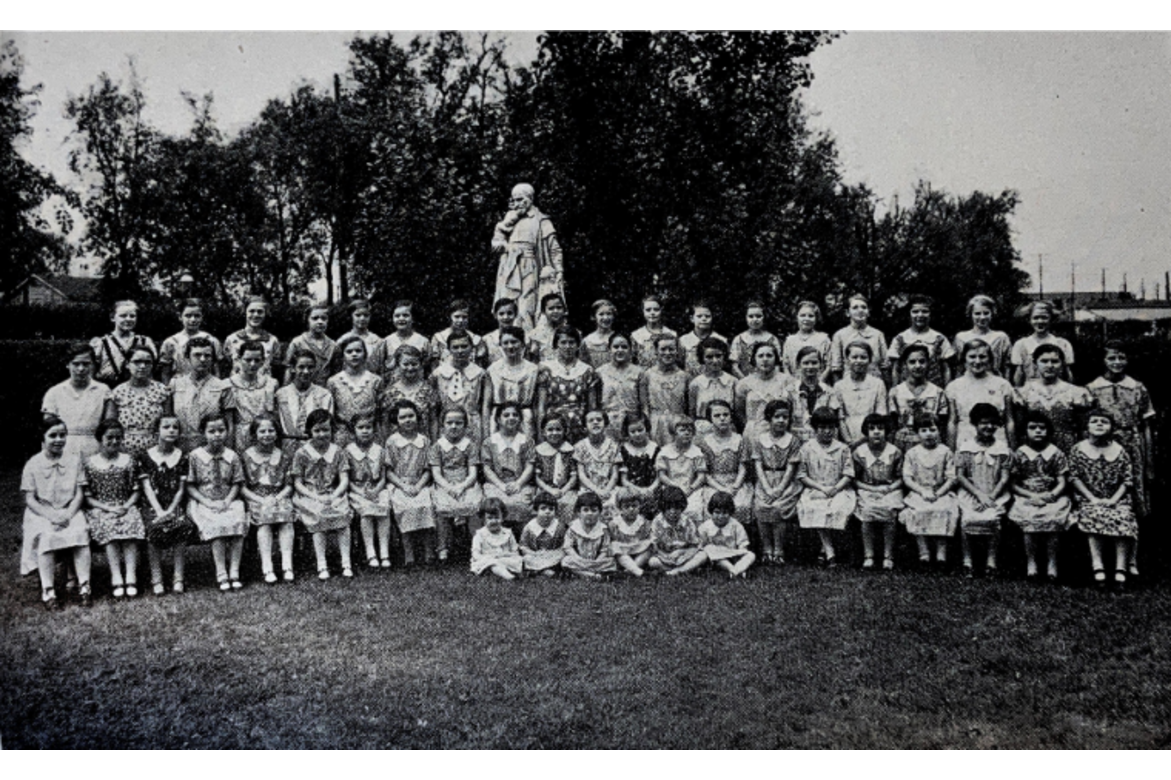 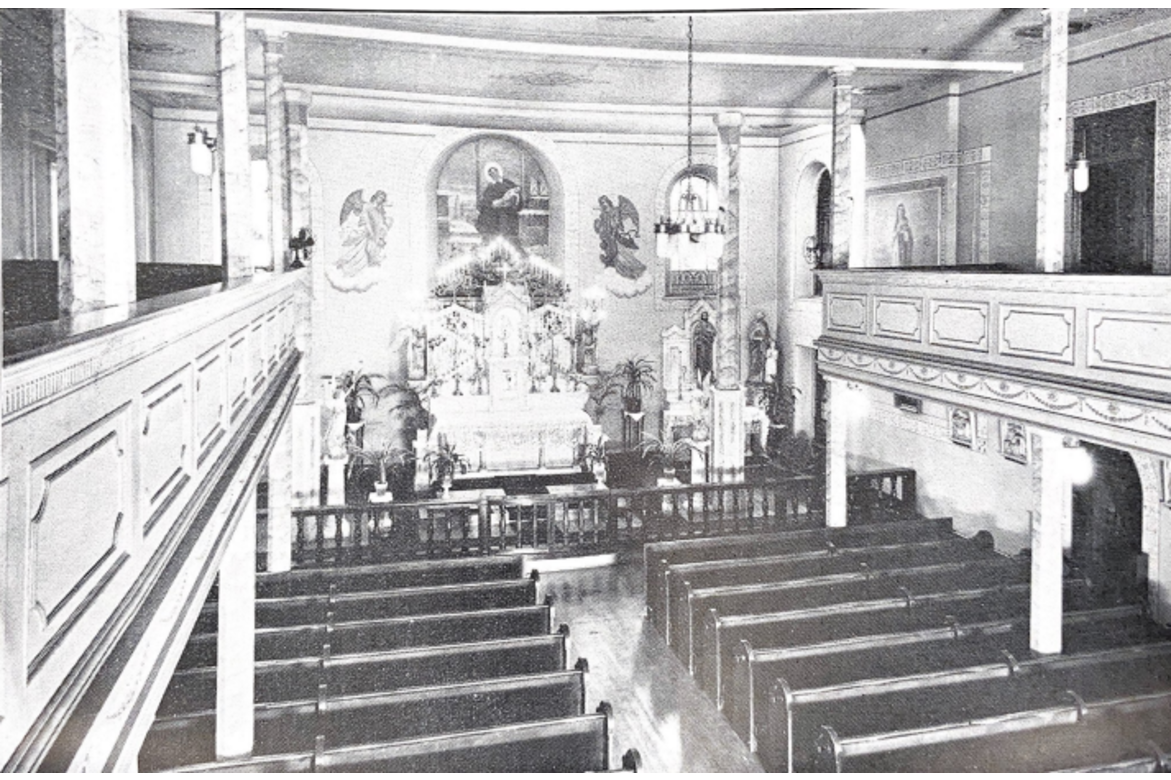 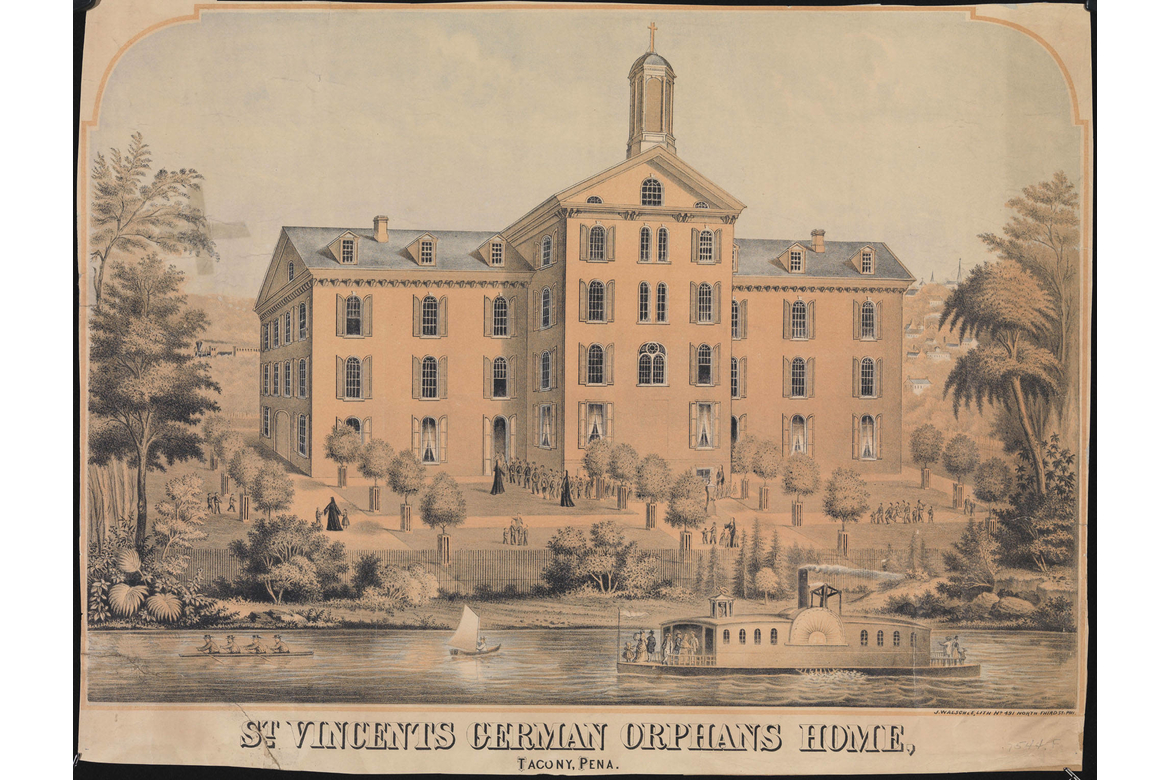 When Philadelphia’s German Catholic population first began to consider the need for a German speaking Catholic orphanage, Tacony was merely a stop on the journey to the city. There were a few inns and taverns for travelers, and the land was mostly used for farming. The St. Vincent’s Orphan Asylum Society was established by a group of members from St. Peter’s Church and Holy Trinity Church in 1855. Following the election of a Board of Managers and the acquisition of a charter, the Society formed a funding plan that would serve as a catalyst for the establishment of the Tacony we know today.

The St. Vincent’s Orphan Asylum Society members pooled their resources to purchase two farms in Tacony near the Delaware river, the land covered a total of 49 acres bordered by the Delaware, the railroad, Cottman Street, and Princeton Avenue. After acquiring land, the Society formed the Tacony Cottage Association with the purpose of reselling 20 acres that had been laid out in building lots. In total, more than 200 building lots were auctioned off and sold to the families that would soon populate Tacony. With funds from the sales and the additional 29 acres left over, the St. Vincent’s Orphan Asylum Society was able to break ground on the new orphanage on November 20, 1856. The building was completed in 1858 and a picnic was held that July as a substitute for the corner laying ceremony.

The first eleven residents of the orphanage entered on March 17, 1859. They were greeted by three Franciscan Sisters. The children ranged in age from three to nine years old, there were five girls and six boys. On December 6, 1859 the Franciscan Sisters left the orphanage due to sanitation issues. The building was close to the river and prone to flooding, causing unsanitary conditions that led many of the children and the sisters to suffer from disease. When the School Sisters of Notre Dame came to replace the Franciscan sisters, they found that of the ten girls and seventeen boys living at the orphanage, thirteen were suffering from an infectious skin disease. Sanitation and disease continued to be an issue for the children and sisters living in the orphanage. In 1868, for example, a boy and a girl whose mother died of Typhoid Fever brought the disease into the house, affecting 22 other children. In this same year, the first bathtub was installed. In 1877, 32 children were affected by Scarlet Fever which proved fatal in one case. In 1885, the orphanage had a new bath and toilet systems installed.

Until the completion of St. Leo’s in 1884, St. Vincent’s was the only Catholic Church in Tacony. In its early years, St. Vincent’s operated as its own parish with its own priest. The chapel contained in the Southern wing of the building was used until 1861, when an addition containing a new chapel and dormitories was completed. In 1863, the pastor of St. Vincent’s, Rev. Matthias Joseph Meurer, was assigned to the Bridesburg congregation. From then on, St. Vincent’s was a Mission to Bridesburg until the installation of Rev. Father Freude in 1879. St. Leo’s was opened for the English speaking Catholics in Tacony in 1884, but St. Vincent’s continued to serve Tacony’s German population.

In addition to serving as Tacony’s only Catholic church, St. Vincent’s was the only Catholic school in Tacony until 1903. The school began in the same year that the orphanage was opened, serving children at the orphanage and families living in the area. In its early years, the school employed just one teacher for all classes. In 1866, the completion of a Northern wing allowed the school to be divided into a “big” and a “little” classroom. In 1874, it was moved to the second floor of the Northern wing, and in 1879 another classroom was added on the third floor to accommodate 67 new pupils from the neighborhood. By 1893, there were more than 300 children living at the orphanage. In addition, Tacony’s population was increasing due to the success of the industrial plants erected there. To accommodate the growing number of pupils, a new school building with four large classrooms was erected in 1893. Father George Michel came to St. Vincent’s in 1904. At that time there were about 300 pupils enrolled in five grades, Father Michel cared a great deal about education and had the building altered to accommodate eight grades. For a long time, it was the dream of St. Vincent’s priests to open a new Catholic school and parish, St. Hubert’s, in Tacony. This dream was realized in 1924, the final service was held at St. Vincent’s in December of that year and school at St. Hubert’s began in 1926. The new school led to significant withdrawals from St. Vincent’s, allowing the sisters to convert one classroom into a dental parlor to be staffed by Temple University Graduate students.

Through the years, St. Vincent’s saw a number of improvements and additions. A boy’s dormitory was completed in 1901, the same year the sisters installed washing machines. In 1904, new toilets were installed in the bathrooms. In 1909, a new fire tower was installed and the inmates of the House of Correction in Torresdale laid a new road to the orphanage and erected a wall and iron gate at the entrance. In 1915, the chapel was repainted, a Northern fire tower was added, girl’s bathrooms were installed, and the center building received electricity. Electricity was installed in the boy’s building in 1920, and a girls’ shower was installed in 1925. In 1930, the nursery was abolished and replaced with an infirmary. By this point, the orphanage was no longer accepting children under two years old. Boys were expected to leave at the age of 12, and girls were permitted to stay and help with housework until age 18.

Two additional school buildings were completed in 1964, and with the construction of I-95, St. Vincent’s was divided from the rest of Tacony in 1967. The role of St. Vincent’s began to change in the 1970s as orphan-care shifted to a focus on foster care and reuniting with family members. In 1984, a fire broke out and destroyed the main building that had been constructed in 1860. By the late 20th century, residents were not necessarily orphans, but rather children facing neglect or abuse. Children between the ages of two and 12 were taken in and stayed between one month and one year. In 1992, St. Vincent's had a staff of 130 but only had 69 residents and 22 children in extended care.

The purpose of St. Vincent’s shifted again in 2003, when the organization began to focus on care for dependent teen girls, with Mother-Baby and Maternity programs. In 2008, the programs were changed to completely focus on teenage girls and young mothers. The organization became St. Vincent’s Homes and moved out of Tacony and into five homes in various neighborhoods. St. Vincent’s lay vacant for more than a decade before it was demolished in 2021. Though the building no longer stands, those of us who remember this history know that without St. Vincent’s and the German Catholic community there would be no Tacony. 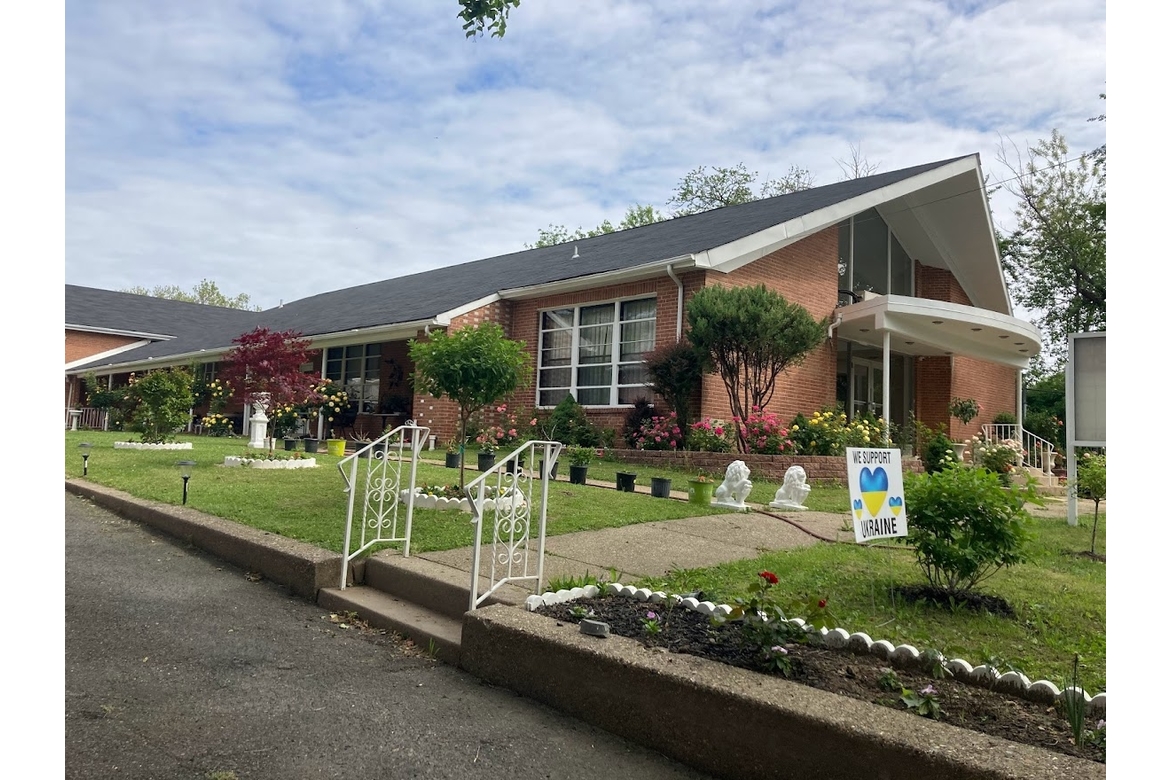 Picture Yourself Here: Tacony at the Top for First Time Home-Buyers